Little Cayman is very popular with serious fishermen (and the not too serious fishermen too). Many guests show up with their fly rod or spinning rod and have very good luck fishing right in front of their vacation rental.

Fishing Excursions that can be booked ahead of time or on island include: Flats Fishing for (bonefish, permit, and reef fish), baby tarpon fishing at Tarpon Lake, and deep sea fishing for tuna, wahoo, mahi mahi, and marlin (if you are really lucky). 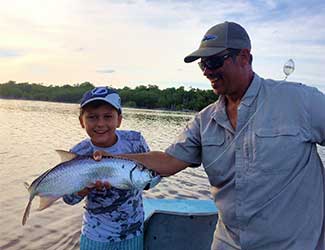 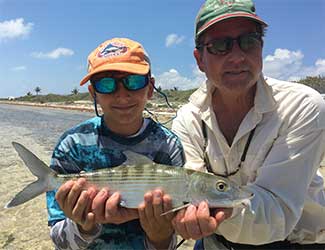 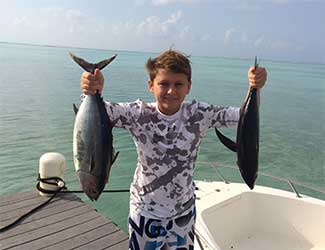 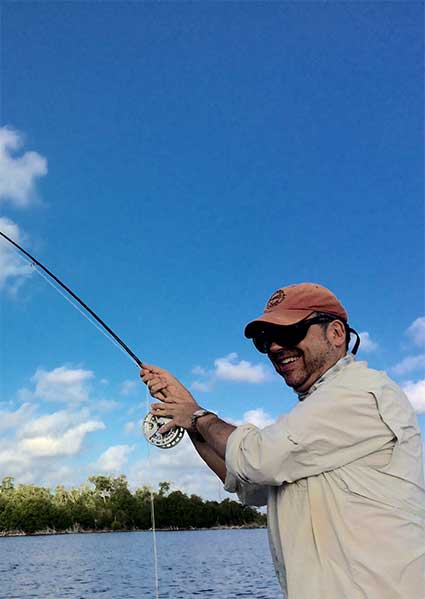 I have been lucky enough to saltwater fly fish in a lot of different places, from the Bahamas, to the Keys and Everglades in Florida and the bayous in Louisiana, to Belize and South Africa. From that perspective, fishing on Little Cayman is a unique experience. There are places where there might be more fish, or bigger fish, but what’s special about the waters of LC is the ease of access, the variety of options, and the almost total lack of fishing pressure. In the half dozen times I’ve fished there, I’ve never had to compete for space with another angler (other than my sons…), and you can’t say that about a whole lot of places on earth.

A typical Little Cayman fishing day starts before dawn, with a trip to Tarpon Lake, which is one of the island’s natural wonders. The Guide will row you out in a small boat, and you’ll hear the tarpon gulping and splashing before the light hits the water. The bite lasts for three or four hours. The fish average around five pounds – so perfect for a six or seven weight fly rod or light spinning gear. If the conditions are right, they’ll take top water lures and flies, which is a thrill even for the most seasoned angler.

After that, you can have a nap in the hammock, and then head out in search of bonefish. If you want to do it on your own, there are fish to be found all along the beach, many of them in the 4-5 pound range. They’re wary, and very challenging to catch. Some of them cruise along the trough that’s only a foot or two from the sand, and often they’ll see you before you see them. Others can be spotted tailing in the grass flats between docks, especially on a rising tide.

If you want to go farther afield, you can head to Owen Island, which has a pristine white-sand flat that’s perfect for wading and sight fishing. The fish are always there, but you’ll have to make a good cast to catch one. For beginners who are looking for their first bonefish, there’s the option of cruising South Hole Sound in search of “muds” – huge schools of bonefish that kick up the sand on the bottom and turn the water milky. With a spinning rod or a fly rod, even a first-timer can cast into one of those schools and have a very good chance of hooking up and experiencing one of those famous bonefish runs.

Depending on wind conditions, there are a series of other wade-able flats on both sides of the island. That’s where you’re most likely to run into a bigger fish. You’ll probably have the flat all to yourself, and there’s no danger of running out of new water to explore.

For those who are hoping for a “Little Cayman Slam” – a bonefish, a Tarpon Lake tarpon, and a permit – the last part will be the toughest. There are permit in the waters around the island, but they’re elusive and always seem to turn up when you’re least prepared to cast for them.

In addition to the in-shore fishing, if blue water is your thing – or you’d like to catch your dinner – it’s a very short stream through the reef to very deep and productive waters. Depending on the time of year, there are tuna and wahoo and mahi, plus if you’re lucky, shots at billfish. There aren’t many places where you can have a deep-sea line in the water ten minutes after leaving the dock.

I know most people come to LC to dive and snorkel – or just to relax. But even if that’s your primary goal, it’s well worth throwing a fly rod in your bag.